When I wrote the Making-Of for Toro Rosso I already had a second text in mind for the McLaren. However time constraints pushed it back several times. Also I was waiting for somebody to actually ask for it. I ended up sending Mediocre to send somebody to ask, to keep the illusion. I prepared the text anyway. 🙂

This is about the chrome-effect of McLaren.

I can date this one back to December 1st 2006. Wai was working on the first iteration of the car, but had slow progress. I signed for the car, because I liked McLaren’s first chrome-livery and I had a few ideas on how to bring it into rFactor. In Dec 2006, I was in my third semester of studies, I was involved in a video project and with my other courses, I barely found the time to work on CTDP and since the McLaren wasn’t ready anyway, I put the car on hiatus. I wasn’t sure if I could paint it later or if somebody else would take the car in the meantime, so I sketched out how I would approach the texture. I wrote half a page of documentation in our private board and annoyingly half a year later I found a McLaren which actually used the techniques, I outlined there. Coincidence? 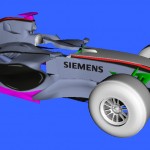 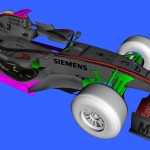 Let’s start with the car itself. The final car was a kitbash of Wai’s initial shape and the model done by Eugenio. I started the actual car texture in April 2007. The livery is not difficult, just a few smooth lines and logos. Above are two work-in-progress-shots with provisional-colors. The chrome was added later and to illustrate how I did it, I prepared a small presentation.

So the texture was pretty much done. The refleciton map would turn up the reflections and make it chromy, the surface of the car would support this effect. A special Cubemap was create which had a bit more track details, which you could see in close up. This was exactly how I imagined it in the first place and I’m glad it turned out the way it does. Of course seeing it ingame for the first time made me feel like a little school girl. The shot in rFactor’s skinner is of that first day. Next to it is my personal all-time favorite screenshot of the final car. In between it got a bit more tweaking, but there were no big changes. 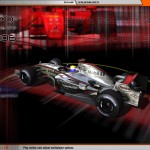 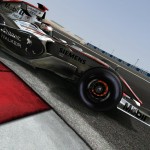 McLaren was another one of those cars, which developed over a long period. I began in April at the beginning of my fourth semester, which became my second-hardest and so the car wasn’t finished before july. But once it was done, it was done for good.

So this is the story about McLaren, even though Mediocre was the only one asking to hear it. I got a couple more and I may write more eventually. I think this blog is a nice way to document a little bit of the past, when CTDP was an unorganized bunch of kids of every age. Yes, I may also write about last week. 🙂