With this post we will start a new blog series called “inside F1 1994”. This blog series will show you some interesting technical aspects of the formula one season of 1994.

Today in inside F1 1994, we want to shone some light on the early season suspension using the brand new modeled Ferrari 412T1 from our modeler Erale.

As with most cars running a high nose, the lower front wishbones locate on to a central point to tidy up the under-nose airflow. Hower, unlike other system which are attached using a pair of closely-positioned uni-ball joings, 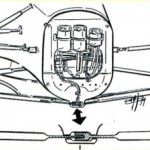 Ferrari designer John Barnard actually links the wishbones using a male/female joint on the knife-edges, reaping the benefits of increased stiffness. The drawing also shows how Barnard has been able to locate the master cylinders inside the chassis bulkhead, by already working to the 1995 regulations. Ferrari also ran a third front suspension configuration at Imola with the secondary dampers encased in a metal cradle. Again, increased stiffness appears to be the main benefit, along with more predictable damper movement.

Trying to reproduce the 1994 cars as close as possible we tried to recreate the suspension, a very significant part of the model, as good as possible according to our reference pictures/drawings. We have a thread in our internal forum to show progress and discuss upcoming issues or a lack of references. 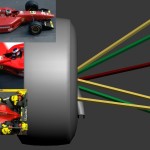 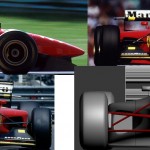 Erale made a few screenshots in 3ds Max and Andreas T made comparison pictures to show what erale modeled accurate and what needs to be changed.

Here is the final outcome: 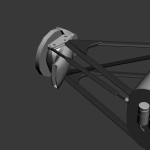 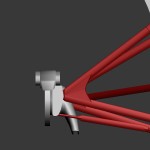 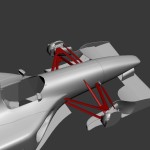 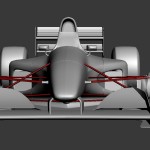