I just finished reviewing the early Sauber Mercedes for the F1 1994 mod. The model, as all models was done by BMWFan and is awaiting touchup by Neidryder to bring the car ingame. The textures were done by Codan. The story about Codan is, that he joined the team nearly 4 years ago and worked as a programmer on the Control Center and For the longest time he was able to hide is painting talent, but with this car for 1994 and even moreso on the cars for the SF-2009 game he has shown, that he can handle the tools and deliver some great cars. 🙂

Now, Sauber is a car where you don’t see that much details on the black texture. 8) 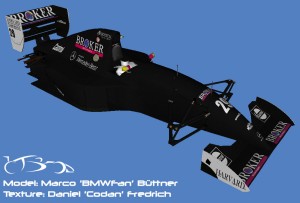