While working on our mods, CTDP also likes to give haven to related projects. Marvin Fröhlich, Marcel ‘M4rrs’ Offermans and Sascha ‘Gonzo’ Grindau have been invovled in a little pet project. Marvin is another programmer in the team and started a new dynamic HUD, short dynHud for rFactor. We will get into the details of the project some other time.

Interested designers can contact us via eMail or in our forum.Feel free to repost or retweet this wanted.

This story is a little bit off topic. It’s not 100% related to CTDP, however a small project of mine, that came from my work at CTDP.
I painted cars for several years and there were always a few things that bugged me. Since the release of rFactor I had to deal with DDS-files. DirectDrawSurfaces is a texture format for DirectX and it is not wide spread outside of DirectX and among graphics applications. There are plugins for Photoshop, gimp and Paint Shop Pro, but as soon as you don’t use any of those you where screwed. When I moved to Mac, I was missing my most simple tools to open DDS-files, which got me pondering and looking for ways how to write my own utilities. END_OF_DOCUMENT_TOKEN_TO_BE_REPLACED

Shaun (Whata) released Imola 2006 several days ago on rfactorCentral.com. As you may know this track is a conversion, so he had his doubts if he was allowed to publish it. After talking to rfC-Admins several times he got the ok IF he would add a cd-check to the setup so that only owners of SimBin-games which included the original imola-track can install this conversion for rFactor. So he came to me and after some time he convinced me to do the setup-part.

Finally it worked as it was supposed to and he released the track. But it didn’t take much time until some people wrote comments that the cd-checks are stupid and that they would be forced to buy a Simbin-game for using the track for rFactor. STOP! Forced to do? I want to make one point clear: if someone does not have one of the games, he cannot have the track for rFactor. Nobody is forced to do anything!

The idea came up to add a similia check to our patch 1.1 so that only people with rF 1.255F without a crack can install the mod. We thought about that and we are not sure if that would make sense, I want to give you our pro & contras

So I would like to hear your oppionions about that. As this could be called “copy protection” somehow I want to ask that you focus on the topic and don’t start a general discussion about copy protection-software.

Ok, took a few days, but I finally finished work on the templates. This involved 3 parts:

I order you to paint, I want to see great cars! 🙂

Some months ago I already told you something about the ControlCenter, a lot has changed since then, so I thought it might be interesting to show you the progress of the utility. 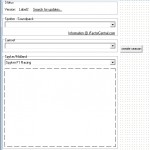 It began with the idea of having Midland & Spyker in the mod and giving the user the option to choose what he likes more. Second planned “main feature” was the option that the user can create his own 2006-season with the tracks he want to drive and the in this time called “configdings” should create all needed files so that on the selected tracks are the correct aero-packages loaded. But as you may know it came out that for both features we found better ways to include them. One of the first tries you see left.

But we got more ideas we wanted to have, like the option to change the menu-music, menu-style, support for RealFeel. If you ever have developed a program you know it: changing something that was not planned is most of the time very tricky and so it happened more than once that I was close to cancel it and start completely new.

This is the first “feature-freeze” version of the tool but we still had ideas and the development of the physics and the bugfixing took time so I had the chance to include various wishes, just like support for LeoFFB, the option to activate/deactivate the pacecar for the player. But not every idea was programmed, so for example an auto-update-feature for our mod. We thought about it and we want to have it bugfree with version 1.0, so an auto-update will hopefully never been needed.

So after more & more facelifts this came out:

This is a very special feeling to get something finished (at least I feel it is of course I know it never will be). But most of the ideas we included and they are working and now the best (from programmer’s view): There are not very much bugreports which makes me even more happy 🙂

But to be honest: I dont think it will look very long this way. If you have ideas what might be good to have we maybe add it so it’s a never ending story…

So we hope you will use the features of the CC, if not: CTDP F1 2006 will work without having started it once. So you see: The CC has changed a lot during it’s development, just like the whole mod did. Maybe you know why it took about 2 years.

It’s always the same with software: it is never finished, final or even close to.