The work on the F1-2009 mod has been stopped, after the last half a year didn’t result in any major progress. Read the full story on our website.

Spoony sent me a few more BrawnGP shots. The rearwing is new and personally I love the detail work on the frontwing.The car is up to 18k faces now and pretty much done. Spoony will update some things on McLaren and hopefully we get to map both cars soon.

Ok, everybody who guessed BrawnGP was right of course.

We already posted pictures of the McLaren done by Spoony a few weeks ago. Soon after finishing the major work on the car, he continued to start molding the BrawnGP.

Spoony began his work at the end of March. Here are some more of his early WIP shots and two shots of today.

Ok, let’s continue with a few WIP shots. This time I’m not going to tell me which team it is. You tell me. 😀 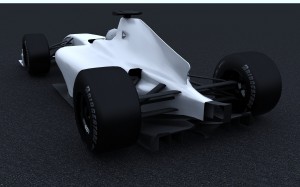 Continuing our weekly sifting through the WIP-shots done in the past 2 months. I got a bunch of pictures of Williams 09. Done by Kevin ‘Fongu’ Wong. Fongu is not new and has frequently worked for CTDP before. Among his works are the models of the Super Aguri SA-05 and SA-06 in the F1-2006 mod. The car was also started in January. You gotta love the Williams Team, they released a couple of promotion renders of their car in orthogonal views. Since the presentation car in January, many things have been changed, which weren’t updated in the model yet. Which is why you see the presentation-nose on the car, not the one used in Melbourne. This will be done later.

Another few WIPs. This time I post a few helmet-texture shots. The helmet models will be reused from the F1-2006. Revisions and updates will be done where necessary, for example the Arai-helmet. Usually helmet textures are done “in between”. When a painter is bored, he picks one and does his art. The two textures shown here are done by Shaun ‘Whata’ Stroud. Shaun joined us during the F1-2006 mod and has grown into the team, we wouldn’t want to miss him. Some of his work was the Midland/Spyker-, the Super Aguri- and the Safety-car, along with many of the 2006 helmets. He’ll also be involved with the car textures for F1-2009.

At this point we’d like to issue a call for help. While we are on the topics of helmets, we are in need of a helmet-modeler. Out car-modelers are occupied or have no experience modeling helmets. Helmets are not just spheres with a cut-out for the visor. Modeling the helmets has become quite an art. While the changes for 2009 are manageable. 1994 requires much more helmet work with more limited resources and we are struggling to find somebody to help us out. So if you are a dedicated helmet-modeler, or know somebody we could ask. Tell us here or contact us at dahie at ctdpworld.org

Racervieh got me a few additional detail shots of his Ferrari-model. They show the current state of the car, though I can not tell which track-configuration this is.

Lets take a look at another car for the 2009 mod, which has been in progress so far. For our 2009 mod we could get David ‘Racervieh’ Bennewitz as a new modeller. His first car was Ferrari, which he worked on from January to March. The model is mostly done, will get some updates in the time to come. Racervieh documented his progress really thoroughly, so you can see the progression on the car.

David started in January and was the first in our team to start the car. He also comes from the GP4-community and had a thread describing his progress in more detail.

At the moment, we have several models in progress. At this early stage of the mod, we do not develop for one specific game. The raw-models and textures could be used for any game and it is in later stages, that we actually optimize the data for a specific game. Reports of this being the first mod for rFactor2 are exaggerated. At this point we just work and see what game is available when we are done with the basics. Knowing our speed, rFactor2 might become  the option of choice.

This car was actually started, before we decided to beginn the mod. Zunic ‘Spoony’ Bekir was already working on the car and showing WIPs, which looked very promising. So we invited him to join us and he agreed. At the moment he is working on the BrawnGP.

Those previews were made in the first week of may. You can more details about the model in the development thread at GrandPrixGames.com

Disclaimer: Please note, that the shots are a couple of weeks old, since then the models have been updated and to the Australia-configuration. Therefore, these WIPs can have inconsistancies.