Exactly 8 years ago, we started a little project. Today the “Cars & Tracks Development Project” is one of the most respected modding group’s. We could never have expected such success would happen, Our mods are used on public simulators, on TV, even at Games Convention’s. We did a lot of mods for many different games in the past eight years and for sure we will continune our work for rFactor and its successor.

Bahrain International Circuit v1.0 was the first CTDP release for rFactor and brought you one of the newest and also most exciting GP circuits in the modern era, Dusty surface and desert feeling guaranteed!

Now exactly 3 years later, on CTDP’s 8th birthday, we gave the track a major facelift with new Textures, Shaders and additional layouts and cool features. We hope the community enjoys our birthday present!

END_OF_DOCUMENT_TOKEN_TO_BE_REPLACED

As some of you may know im a huge McLaren fan so have been trying to get my hands on a mclaren to paint for CTDP for a while now, but seeing as we only did 2006 since i’ve been in the team i’ve never had the chance. but yesterday i finally got the chance to paint the classic colours of the 1994 McLaren 🙂 heres a few shots.

END_OF_DOCUMENT_TOKEN_TO_BE_REPLACED

Hi guys, this is just a little reminder to tune into PSRTV on saturday to watch our showcase race, we would also like to give you guys a chance to ask us questions during the broadcast just visit this link during the broadcast and join the chatroom, we will be waiting there for your questions to come in and answer them live on air. http://prosimracing.com/racecast/

Hi everyone, Over the past few week’s and month’s, CTDP & FSR have worked close to get the 2006 mod as good as possible with alot of the FSR driver’s taking part in our beta test series race’s throughout the last few month’s.

With this we have decided to end the series on a high note and broadcast the event Live on PSRTV for all to enjoy. The event will take place on December 6th from 18:00GMT using the CTDP 2006 mod @ Interlagos Circuit Brazil. Interview’s with dev’s will take place during the broadcast aswell as the usual high drama FSR action on track with the likes of Patrick De Wit, FSR WS PRO Champion Mikko Puumalainnen, David Greco, FSR WS ACE Champion Fred Gosling and many more FSR regular’s (including me 🙂 ) all taking part in the event. You never know we may even have a very special announcement to make, so join us December 6th 2008 for Live coverage of CTDP-FSR Showcase race live from Interlagos, Brazil on Prosimracing.com

We would like to Thank Dave Carr-Smith for organizing the race and getting all car’s assigned to driver’s to make the race as competative as possible.

Hi everyone, as i said in another post last week I’ll post the driver suits, I finished the first versions of all of them tonight so here’s the previews.

END_OF_DOCUMENT_TOKEN_TO_BE_REPLACED 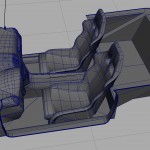 END_OF_DOCUMENT_TOKEN_TO_BE_REPLACED

Heres a few screenshots of what we have been upto.

END_OF_DOCUMENT_TOKEN_TO_BE_REPLACED

Hey guys, Andy’s been wokring his ass off recently to get the safety car finished and in game and he’s done a fantastic job as usual to get it fully done in about 2 weeks and in game working. I was given the wireframes last friday and we been wokring to fix any mapping bugs quickly, i have some prelimiary screenshots of the car on the spinner in game for everyone to see.

END_OF_DOCUMENT_TOKEN_TO_BE_REPLACED

Hi Guys, Raul done a fantastic job completing the car with easilly one of the most complicated peices of mapping i have ever seen, so me and Andy have been working on completing the Renault this evening. Andy mapped the 2nd Nose, Number and Name and i added the dirt layers, bump and spec maps to the car.

More Inside.. Including Tcam and Cockpit Preview