Much like today, 1994 motor racing saw the involvement of many up and coming technology companies. Blended with long established brands and the traditional sponsors of the past, Formula One cars were “dressed” with logos that test the fact that Formula One was then and is still a worldwide sport.

Team Lotus is but one example. In 1994, Team Lotus was beginning a season that would end with the Team eventually with drawing from the sport. With this situation at hand, however, Team Lotus was able to draw some of the most prevalent sponsorships of the time in the sport.

Many Formula One cars showed livery changes over the course of the race season to incorporate sponsorships with the targeting of various marketing areas the race schedule provided.

Here is a preview of the livery changes from the first two Grand Prix. Note the two different designs, which switched between drivers in the first races. 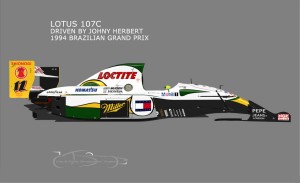 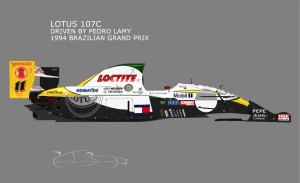 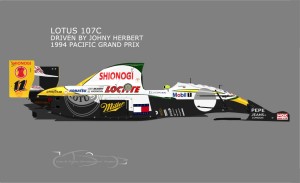 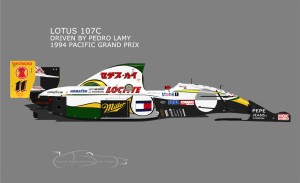 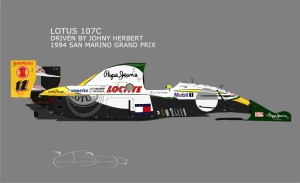 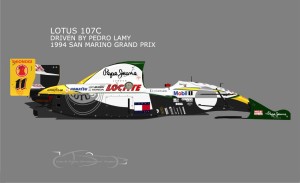 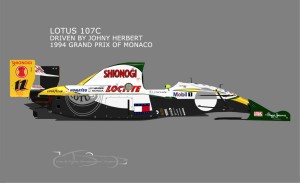 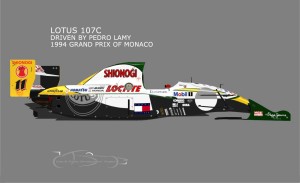 In 1994, Hitachi of Japan was a world leader in consumer electronics and technology goods. Hitachi was also involved with the building of power stations in the mid-1990’s. Hitachi sponsorships remained on the Lotus cars through out the season.

The LOCTITE Corporation is a world market U.S. company that was present on the Lotus in 1994 is a company that researches, develops and produces adhesives, sealants, and coatings. LOCTITE found itself on the cowling or the top side of the Lotus through out 1994.

In 1994, the Shionogi Corporation was one of Japan’s leading pharmaceutical companies. Today, Shionogi has corporate offices in various countries around the world. The Shionogi sponsorship adorned several areas on the Lotus ranging from the cowling at target market races, to on the rear wing fins and also on the nose of the car through out the 1994 season.

Formula one and fashion have partnered over the years and in 1994 the Team Lotus car had sponsorships from the fashion world including Tommy Hilfiger – an up and coming American fashion designer as well as Pepe Jeans. It could be argued that Pepe Jeans was Europe’s best and leading jeans brand at the time. Another example of target-marketing is the example of the Pepe Jeans sponsorship having a position on the engine cover of the vehicle in San Marino. When the Formula One circus arrived in Canada, the Lotus cars had Tommy Hilfiger on the cowling.

Mobil Oil, as well as Miller Brewing, and Komatsu found it’s sponsorships on the car through out the season in various locations. According to some claims, in 1994 the Miller Brewing Company was the world’s third largest brewer. Komatsu is a world wide producer and distributor of heavy construction equipment.

It has been interesting researching the not-so-distant past with limited resources to develop the car race liveries for the 1994 mod. Researching the placement of the sponsors on the cars becomes just a small part of what you actually learn about this snap shot of time during the 1994 season that some have already forgotten.

married, 2 children, part native american, welsh, and german, so I guess I am a mutt...obtaining masters degree at Boston University, work full time and coach competitive sports...love F1 and graphics with a concentration on realism and WW2 History...was alive when the Beatles broke up and watched Neil Armstrong land on the moon in kindergarden class...favorite bands are the Clash and U2... View all posts by (CTDP)juluka