This story is a little bit off topic. It’s not 100% related to CTDP, however a small project of mine, that came from my work at CTDP.
I painted cars for several years and there were always a few things that bugged me. Since the release of rFactor I had to deal with DDS-files. DirectDrawSurfaces is a texture format for DirectX and it is not wide spread outside of DirectX and among graphics applications. There are plugins for Photoshop, gimp and Paint Shop Pro, but as soon as you don’t use any of those you where screwed. When I moved to Mac, I was missing my most simple tools to open DDS-files, which got me pondering and looking for ways how to write my own utilities.

I learned Java at my university, found a few good libraries for DDS-Image handling and DXT-Compression and set down to combine them into some moreless handy system for opening DDS-files in Java-Applications. Based on this, I began to write a few small tools in the boring sunny weekends of Italy last year. To my disclaimer, they were my first own programs and buggy, and leaky and I rewrote them several times, until development stopped in September, when I got back to Berlin and began my Bachelor’s thesis.
Since then the code was barely touched – only once in a while – and I never really had an idea what to do with it.
Now I finally got one. 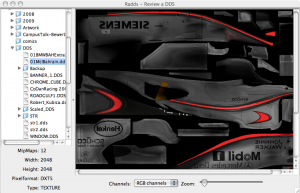 I cleaned it up and moved everything to GitHub, where the source code is Open Source and can be browsed and copied by anyone. Github invites to clone the code, make changes and reintegrate them into my original if they are good. I won’t have any more time in the future than I have now to continue development, even though I think they’d make some nice helpers, but I hope interested people will find the code helpful and can build upon it. I will continue to work on it irregularly and see what the future brings.

The tools are beta and unstable. Their basic functionality works, but they are not well tested and buggy and need some good work to be publicly releasable. This is why I didn’t release anything yet, and don’t plan to release in the near future. If somebody wants them, he can compile them himself. And if he does, I’d like to hear feedback. 🙂

So if you are into Java and curious in my implementations, take a look at the GitHub-Profile.

2 thoughts on “DDS-Utils on GitHub released”