I elaborated about the general history of the CTDP94 mod in the last long entry. Now let’s take a look at one specific car: Benetton Ford B-194. I liked the Benettons of that time, and since I never painted any car, that has ever won a GP, I actually wanted to take the Championship-car this time. While the mod has quite a troubled history single cars can also have quite an history, which I’d like to show you on this example. Read, why it is not good to work on a project for too long.

As I told the other day, most cars where created in 2003 by TDG. I can’t say who exactly modeled and painted the first version. My guess would be Trasher. CTDP got the model in late 2004. We reviewed the material we got and were a bit underwhelmed. We had worked on the CTDP03 and CTDP04 mod before and already found our style, techniques and principles. The latter being the constant search for realism and accuracy. The sources of TDG where ok by the standards of 2003, but for a release in 2005, it was no match. So, we began to discuss how to approach it. In the short free time before the season 2005, Andy aka Neidryder took on the model of Benetton. He updated the shape, remapped it and I took the challenge to paint it. Worked on it for a few weeks, untill the new season was more intesting. You can see the result below. On the left is the original TDG-car, on the right the updated version from 2005. 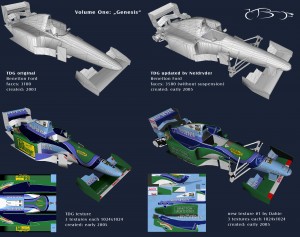 CTDP05 for F1Challange came, for rFactor came, CTDP06 came and went and CTDP94 was always a bit in the background. When all shapes for 2006 where done, Marco began to work on all models from scratch. The 4 year old sources just weren’t good enough anymore to create a high-quality mod for a modern racing game with them. New models, new textures were required. Marco created the new model in 2007 and painted it during 2008, along with nearly all other cars. He painted prototypical-textures, as he is no car-painter, so all cars would need another proper texture update, which is currently underway. This is where I jumped on the texture again. I scaled up Marco’s original texture and the result was already nice, but there where a couple of spots, I just didn’t get right. I asked Marco nicely, to improve them, and he said no. Another 5 tries later and a ton of image material, he was finally convinced and did another major update to the sidepods, which he demonstrated a few days ago. I got the new model, was greeted by a new mapping and suited the old texture on the new carbody this weekend. This went better than I thought. Here is a comparison simelar to the one above to see the differences in the newer models. 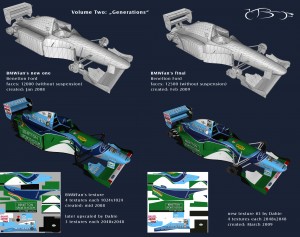 I hope the screenshots are ok, I expect it’s hard to see the differences, if you don’t know where to look for them. but the progression between 2003 and 2009 is quite obivous. What happend was, that Benetton was basically multiple-times the victim of waiting to long. It doesn’t work to build on a mod in the background. It takes ages and while you work on your foreground project you continously learn new techniques which make the earlier work obsolete. It’s hard to make all cars in equal quality and to give them the same look-and-feel.

Hopefully, this car will finally be finished and ingame soon. I keep you informed when this happens.