Two weeks ago, we already presented you some of our mods, we had in mind at one point in time, but which didn’t come to conclusion for various reasons. Today we talk a bit about features, that were actually planed for the 2006 mod, but which were dropped at some point. Actually, when I spoke with Andy for this post, we didn’t find alot to talk about. Obviously, this made us happy, since most of the goals we set for the mod are met, yet it doesn’t give too much to show here. 🙂

A F1-season isn’t static. The cars change, the drivers get better or worse, a season is dynamic. We tried to capture that and actually we are satisfied with the way the cars develop through the season with all the upgrades that can be installed. One thing that has been missing in all our F1-mods no matter the game are the driver changes.

Yuji Ide left Super Aguri, Montoya left McLaren, De La Rosa took over, Jaques Villeneuve left BMW and Robert Kubica got his seat. This are just some of the changes that happened through the grid and that we liked to have simulated as well, but unfortunately there is no interface to do this. Since the fundamentals are missing, there is nothing we can do about it. We did like we did in all our seasons and used the grid of the last GP for the whole season. Name tags on the cars are accordingly and ignore the drivers that drove the GP originally. We are sorry for the fans of the drivers who left during the season, but we can’t please everyone.

Already for F1-2005 there have been requests to support the third drivers who only drove during the friday practice. Mostly leagues trying to use this for their events. We did some small testwork on the 2005 mod to try, but adding the drivers didn’t really work, because the third drivers can’t be disabled for the qualifying and would start in the GP as well. We didn’t like it and didn’t develop it further. On a sidenote, because we (as in me) planed to make it easier to support more drivers on one car texture, we tried a new mapping, which was screwed and not adopted in the longrun. We ended using the same mapping style as in 2005, except less consistent (switching left and right sides, argh), which is bugging me everytime.

Obviously, this is another limitation by rFactor. Not much to say actually.

This one goes back to the year 2005, where we did the great damage model for F1C. Instead of just breaking wheels, suspension, front- and rearwing, we added a multiple of new objects. The frontwing could break in two, the rearwing as well, the bargeboards could come off, the nose could be damaged, the t-cam (my fav) and the complete sidepod could rip open. It looked good in the game, although it was the first try actually and we thought we could do better. We left out the damage model for the conversion of the F1-2005 mod for rFactor because we were new to the game and didn’t want to delay the mod by increasing the necessary complexity. The new damage model was supposed to be in the new 2006 mod, which was planed for october 2006 (no comment, please, I beg you!)

We sketched some ideas how to make it better, nicer, Marco worked on some internals, 3D-engine, gearbox, cooler and Andy took the BMW 2006, our first finished car and added the same damage-parts as in the 2005 mod, added the technical parts and made a few screenshots. 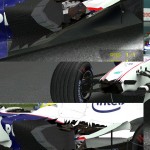 It looked good and it was an horrendous job. The number of elements increased dramatically, the bodywork parts had problems with their normals and in combination with the proposed upgrade system, it wasn’t really managable. We thought complexity was enourmous and it was clear we could only do one thing: either damage or upgrades. We chose upgrades, because rFactor is one of the few games, which has a full upgrade interfaces, which we could use and becaue upgrades are something which actually influences the driving. Damage would have been just eye candy.

We didn’t use the breaking body parts, but kept some of the new elements. So the damage model is more refined, Barge-Boards are added for example and so the upgrades helped the damage model a bit.

Obviously, today we can say, back then we underestimated upgrades as well. I asked Gonzo and he couldn’t tell me how many are actually included. It’s beyond us. We have up to 6 or 7 different front- and rearwing configurations for each team alone and we included as many variations and upgrades seen during the season as possible. Each with their own LODs, which were done by Afborro. We think, the upgrades were a good choice and we hope you’ll have fun with them. 🙂

PS: Another sorta lost feature, originally I thought the upgrades could be selected freely ingame. Today, when I see the amount of things you’d have to upgrade for a single GP, I completely understand why the system was based on track-configurations, instead of single upgrades. Better keep your brain and drive.

16 thoughts on “The Lost Features”