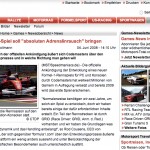 At Motorsport-Total.com is a german preview about the new Codemaster’s F1-Game. The text as usual is from Speedmaniacs.de however the editors felt, the illustrations where to weak and they decided to tune it up a little. So they added an image of our F1-2006 mod (including copyright notice) and put it right next to the article. The caption didn’t match but whatever … they tought. We contacted them and they explained, that since there are no pictures of the new Codemaster’s game they used “screenshots of the new F1-2006 modification by team CDTP” followed by an apology for insecuring “us” as in the reader about the source of the screenshots. They obviously have no idea who it was asking, nor do they see how much care they are showing off. This is low-level journalism, but at least it’s entertaining seeing companies and magazins, who should know there stuff doing bullshit.

I remember back in 2001, Giga had a GrandPrix4-preview, which they illustrated with a screenshot of my RaceCar-fantasy-car from GrandPrix3.

Personally I only laugh at such incompetence, but if I wouldn’t laugh, I could easily get insulted and angry at such blatent ignorance.
Point with your finger and laugh at them. 🙂